This is the coloring book-with-CD I mentioned in the recent newsletter. It has received good reviews from the neighborhood tykes and is now all dressed up with a cover picture by one David Jorgenson (who illustrated the Velveteen Rabbit, and many others, and happens to be a neighbor); 16 pages, with each verse on a separate page ready for your budding Picasso (Monet?)
It’s now available online and at shows.

And here’s the song that made it all possible, The Fish Story Song: 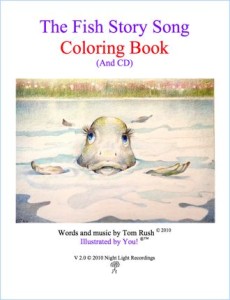 I think I’ve figured out why the YouTube clip of the Remember Song has been jet propelled lately (it’s logged about a half-million plays since the first of the year). You guys have been posting the link on your FaceBook pages! This is like having a hit on the radio back in olden times, so after 50 years of dogged slogging I have at last become an overnight sensation. Thank you – and keep up the good work!

In other news, a recent study found that the average American walks about 900 miles a year, while a different study revealed that Americans drink an average of 22 gallons of alcohol annually. I regret to report that I am below average on both of these indices, but if you do the math you will see that Americans get about 41miles to the gallon. Just an average, mind you, actual results may vary, but I thought you should know.

Off to the Rockies this weekend with a film crew in tow, starting the documentary process. They won’t be shooting the shows themselves but picking up “B-roll” footage – tuning guitars, sound checks, talking to folks at the vending table, trying to wheedle my way out of a speeding ticket, stuff like that. Thursday in Crested Butte, Friday in Denver, Saturday in Colorado Springs. Come on by. If you can’t attend, send a friend.

PS. Advance notice: on Wednesday, March 28, I’ll be doing a very special show at Passim in Cambridge, MA, officially kicking off my 50th year by going back to where it all began. (The space that is now Passim was, back then, the Club 47.) Tickets aren’t on sale yet, but mark your calendars. It only seats about 80 people … ‘nuf said.

Quotes of the month:

“Of all vices, drinking is the most incompatible with greatness.” – Walter Scott

“My rule of life, prescribed as an absolutely sacred rite: smoking cigars and also the drinking of alcohol before, after and if need be during all meals and in the intervals between them.” – Winston Churchill 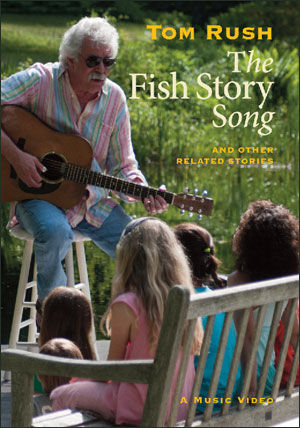 Our landlady recently told me that the bed in our guestroom is the same bed used by Queen Elizabeth and Mick Jagger! Well – I can tell you I was stunned, and more than a bit thrilled to think that I’d been occasionally napping on hallowed, if somewhat sullied, grounds.

I inspected the bed and it seems to have sustained minimal damage. One of the slats is cracked and the bolts need tightening, but other than that it looks like it made it through the ordeal in good shape. I’ve been keeping the place picked up for a while now in case they might return for another go, but so far … nothing. I suspect she might have had enough and frankly I can’t say I blame her. If she’s come to her senses God may have in this instance, in fact, saved the Queen.

What Liz and Mick (I feel so close to them now) were doing at our house – other than the obvious – remains a mystery. Still, I’m thinking of putting a velvet rope across the door and charging $5 for the public to come have a gawk. “Pandering” is such an ugly word – but a fellow’s got to make a living.

Speaking of which, I’m off to Florida in a couple of days to play some shows. Orlando on Thursday,Clearwater on Friday, if it’s Saturday it must be Ft. Lauderdale, and then Sunday in Stuart. If you know anybody in any of those neighborhoods give them a heads-up. Come by yourself, of course, if you’re around.

One of the grand things about living in New England is that there’s never a dearth of things to complain about. We go seamlessly from moaning about the cold in the Winter to bitching about the heat in the Summer, pausing only briefly to take note of the rain and black flies in the Spring and how the garden’s failing in the Fall. On those rare perfect days – 68 degrees, not a cloud, light breeze from the south – you can hear people observing, with a touch of petulance, that they “can’t complain.”

We are currently in the midst of our annual Take A Black Fly to Lunch festival. About this time last year I heard a fellow on New Hampshire public radio talking about the little darlings. It turns out that, while mosquitoes need stagnant water to breed, the black fly requires a pure running stream. No pollution tolerated – they have higher standards than most bugs. You could tell by his doting tone that the chap found this to be an endearing quality. He also fondly pointed out that when the female bites you, she is not merely sucking blood, as an ordinary insect might. Rather, she is taking a tiny chunk of your flesh back home to feed her brood. I actually thought this guy was expecting an “Aww, isn’t that sweet!” kind of reaction. I’m sorry if I disappointed him. Speaking of non-sequiturs, the Fish Story Song (now available for download at the web store!) seems to be taking on a life of its own. One Todd Kwait wants to make a video of it and will be coming later this week to do a shoot of me singing the song for some kids. I’m sure this will involve some rollicking and frolicking, perhaps even romping. I’m frankly not as good at that sort of thing as I used to be, and hope that I will be allowed to simply look on while smiling benevolently and nodding sagely. (I’ve gotten rather good at nodding, if I do say so – practice makes perfect, they say!) We’ll see what the end result will be, but I hope to be able to share it with you before the year is out.

Some shows coming up:
With Jonathan Edwards! The Colonial Theater in Bethlehem, NH this Thursday;
Two nights in Natick, MA at the Center for the Arts (TCAN), Friday and Saturday, June 17 and 18th;
A reunion with Buskin & Batteau at the City Winery in NYC, Sunday, June 19th;
Prescott Park in Portsmouth, NH will be a FREE (!!) outdoors show (unless you want to make a donation) (though it’s my birthplace – they STILL haven’t put up the statue) on Thursday the 23rd;
and Saturday the 25th will be the Nashua Folk Festival at Holman Stadium in Nashua, NH (with, as of this writing, James Montgomery and Bruce Marshall, Kate Taylor, the Jon Pousette-Dart Band, and Jonathan Edwards).
And to close out the month, an outdoor show at Codman Farm in Lincoln, MA.

Quote of the Month: “Spring has returned. The Earth is like a child that knows poems.”
– Rainer Maria Rilke