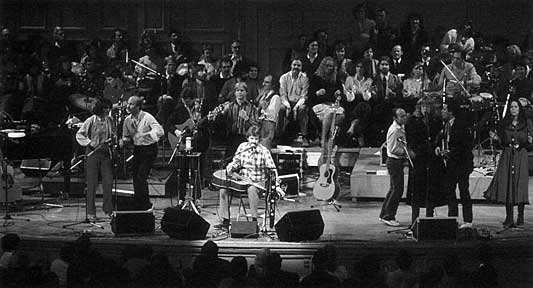 Club 47® Concert at Boston’s Symphony Hall
“Honoring the Past, Celebrating the Future”The Club 47 once was a coffeehouse in Cambridge, Mass., now Club Passim.  It became the epicenter of the ’60s folk renaissance, bringing together the legendary artists of folk with the best of the new generation.
Today, Club 47® is a concert series organized by Tom Rush to keep that tradition alive.”

The Club 47® Tradition ..
There was a long hiatus in the Club 47 shows I used to do at Symphony Hall in Boston, Carnegie Hall in NYC, the Kennedy Center in DC and many other fine halls around the country. 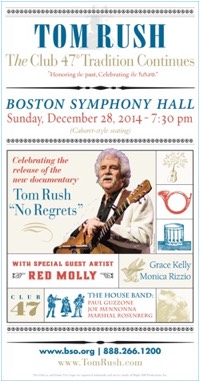 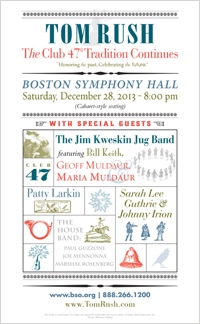 “It was a magical night, not just because the music was wonderful, but because it really encapsulated and brought back in superb fidelity, a validation of our memories of how informal and intimate and honest the performances were back when. This was reinforced because every artist got a chance for their moment in the spotlight, and also participated in pairs and multiples with every other artist on the stage. There were comings and goings and no discernible blunders and one charming surprise after another. The jug band was, if not as tight, every-bit as together as ever they were and the gestalt was as artistically satisfying as I have ever heard them. The solos by Jim, Geoff, Maria, Bill Keith reminded us of how competent each of them were as individual artists before they had ever teamed up. We missed the insouciance of course but hardly forgotten were Fritz Richmond and Mel Lyman. Matt Glaser, Joe Walsh and David Landoni filled in for them with enthusiasm and technical brilliance. Patty Larkin had her fans enthralled and clearly Sarah Lee and Johnny Irion added droves to their fan base.

“It was an evening of warm memories, and if I had ever had a suspicion that I had over romanticized the artistry that had blossomed in that fragment of a decade, roughly called the ‘60s, all doubts were swept away.

“Kudos are due to producers Rob Stegman and Todd Kwait in this, their maiden voyage into concert production.”

In December 2012, I celebrated my 50th year on stage and brought a gang to Symphony Hall Boston. On board were Jonathan Edwards, Buskin & Batteau, Eric Lilljequist, Dean Adrien, and Dom Flemons from the Carolina Chocolate Drops. Trevor Veitch, my guitar slinging buddy from the wild ’70s, and Dean Adrien and Joe Mennonna joined us. It was a party to remember! A DVD/CD 2-disc set from the show is available here.

Club 47 shows at Boston’s Symphony Hall, The Kennedy Center in Washington, DC, Carnegie Hall in New York and many other venues around the country, both large and small, have featured established acts like Bonnie Raitt, Emmylou Harris, The Jim Kweskin Jug Band, Maria Muldaur, Richie Havens and Joan Baez, and have helped newcomers like Nanci Griffith, Alison Krauss, Mark O’Connor and Shawn Colvin to begin to build their own careers  –– and the tradition continues.

Club 47 concerts demonstrate both that the music has a rich and resonant history, and that the future looks better than ever. “Looking forward, looking back,” says Rubordersh, “one generation introducing the next.” They are concepts the public and the media find easy to embrace. “Still,” he adds, “it all comes down to a really good excuse to throw a party.” And what a party!

“The Kennedy Center Concert Hall was packed and the stage crowded with musicians and friends Saturday night. Rush and his fellow performers not only celebrated the past and the traditions that link one generation of musicians to the next, but they also made the future for acoustic music look bright indeed. Evocative … sensitive … imaginative … gorgeous … breathtaking … compelling. The music cast an intimate spell.” – THE WASHINGTON POST