Years ago, when he was but a tyke, my boy Benjamin was asked in school to write a short piece about what he would like the world to have for Christmas, and then what he would like for himself. After long and careful thought he said he would like the world to be a beautiful and peaceful place and wanted everybody to love each other and get along without fighting. For himself, on the other hand, he desired the GI Joe Hovercraft fully decked out with rocket launchers, machine guns and flamethrowers. And that, in a nutshell, seems to be the problem. Something to work on in the New Year!

In late-breaking news: Some top-tier seats have just opened up for the Symphony Hall show on Saturday the 28th (Donald Trump can’t make it after all). Several other sections are sold out already. These tickets, of course, are the most tasteful and exciting gifts possible, so don’t dawdle! (If the Box Office can’t mail them out on time, not to worry — they’ll just hold them at the ticket window.) 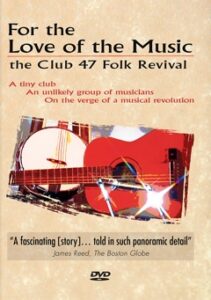 Also, the video documentary about the original Club 47 and the Cambridge folk scene in the ’60s, “For The Love Of The Music,” has just come out and is available in DVD or Blu Ray. And the very nicely done DVD/CD set recorded at last year’s show, “Tom Rush Celebrates 50 Years of Music,” is by far the most popular item at the web store. (Both fit nicely in stockings!)

It’s time to thank all the folks who have helped me get through the year in style. Mr. Dan Beach runs TomRush.com with a firm and elegant hand, never letting me drift too far from my moorings. Andrea Sabata and all the good people at Skyline Music find me fun gigs to do (sometimes a few too many, but I won’t complain). The troops at Nimbit do a great job of fulfilling orders at the web store. Tim Burke tends the vending table at most of my shows with boundless energy, setting up the most beautiful displays. Todd Kwait and Rob Stegman make great videos of all sorts, including the videos mentioned above, and have provided essential support in mounting this year’s Symphony Hall show. Jim Musselman and Alan Edwards at Appleseed Recordings do a fabulous job at getting the music (and the word) out. And my family. Ah, my family! They haven’t yet kicked me out. (It’s not easy being me, but being related to me can be pure hell!)

And of course you, the Gang, who make all of this possible by supporting my various projects and explorations, some of which actually turn out to have been good ideas. Then there are the others, but we won’t talk about that just now.

Thanks for reading, and have the warmest and happiest of holidays!